I promised that I would do a day-to-day report, so here is my “take” on Thursday’s convention. I have decided to keep things simple and used categories and a bullet pointed system. Please note, all images are copyright Illisia Adams 2013. Do not reproduce them without prior consent, thank you.

The banner outside of The Margate Winter Gardens advertising the even

For this particular day, as this was a preview day only open to a select few Groups, media, etc, the layout was very basic. There was one hall for games and food, etc, and one additional room, to the side, where there were talks. This kept things simple, and effective, but limiting.

The show floor games, attendees and exhibitors from above.

Once again, because this was only a preview day, there were not as many games as there were due to be at the main event, but, that said, I found myself quite spoiled for choice! There was a good mix of genres, skill levels, consoles and arcade machines. 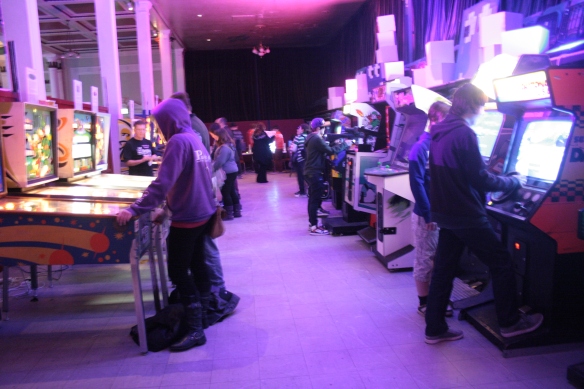 The arcade machines section of the convention hall.

There were Talks and Workshops, but due to a lack of signs or announcements, I missed them all! Hopefully next year this will not be an issue.

There were few Exhibitors there today, as most are exhibiting in the hall which is not opening until the main event, but I did run into Special Effect! again, the charity who specialise in making computer games accessible for everyone around the world, no matter their physical or mental capabilities or disabilities, and it was a pleasure “catching up”. I have been reminded that I need to post the interview with them that we did at Euro Gamer 2012, it has some wonderful insights into their work. There was also a gentleman who was here representing the Pinball Parlour in Ramsgate, a museum with hundreds of pinball machines and other classic arcade machines available to play. 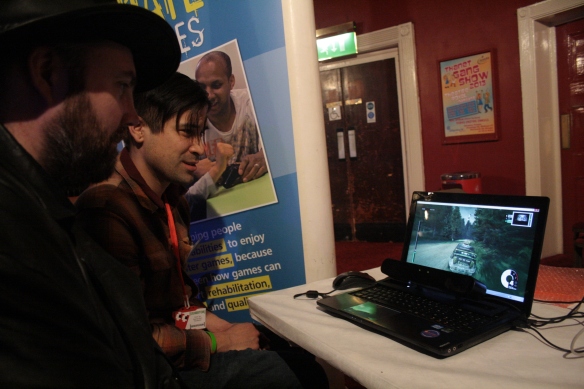 Lord Matt of Thanet Star (www.thanetstar.com) tries a racing game that is controlled using only his eyes, via charity Special Effect’s unique software and hardware for the disabled.

The only food available today was that provided by The Margate Winter Gardens itself. The menu was reformatted into a gaming theme especially for the event, which I thought was a nice touch. The food itself was of decent quality, and the price was surprisingly affordable, given that it is from a food retailer at an event venue. I am told there will be a Food Court tomorrow with much more available.

The staff are all volunteers, and therefore likely all geeks. It really shows, they are all very pleasant people. I have not a bad word to say about them.

The GEEK volunteers “chill out” at the end of a hard day’s work, as the show floor closes for the night.

Drummers draw in the crowds and entertain them outside The Pie Factory for GEEK’s Launch Evening of events.

The Launch Evening event was a stroke of genius. It was cosy, full of warmth and “good vibes”, there were lots of different activities for varying tastes and age groups, entertainment was provided and it was generally an all-round load of fun. Very memorable.

A few problems with organisation today, but over all a really fantastic start to what I can see is going to be a fun, eventful, memorable weekend of geek-iness (every pun intended). Highly recommended.